The Story of Creative Force: Identifying a New Need

How Competitors-Turned-Friends Went From Lite Lagers to Luxury Looks. This is the story about how Creative Force came to life.

Two T's Walk into a Bar

More than 20 years ago, Thomas Kragelund and Tejs Rasmussen were young competitors, creating websites and features for bars in Denmark. Thomas dealt with databases, event calendars, and other technical elements of those sites. Tejs' efforts, meanwhile, centered on visual storytelling-getting a website to depict a bar's in-person aesthetic. Eventually, it made sense for the two to join forces on the same accounts.

"We had this idea of getting an event calendar online," Thomas explains. "And if you put it in a database, you could make a rule that past events aren't shown. So it's a website updating automatically-at that time, in the late 90s, web development was extremely low-tech so that idea was pretty revolutionary. Tejs suggested this beautiful wall design website that was much better on the design side than anything we could do. So I thought if we could combine Tejs's skills in design with our database technology…"

The pair later made their way past last call, and with Tejs joining the team, the company penetrated more industries with an e-commerce consultancy that added his keen eye to Thomas' business savvy. "We were helping companies in Denmark get online with shopping cart functionality and adding products to their websites," Thomas says, though noting there was a catch. "We'd go and pitch beautiful websites, storefronts, and so on-very well designed. But reality hit us: we saw clients uploading these really ugly images-just awful visual content-on beautifully designed storefronts."

Thomas spotting that problem and Tejs working to make solving it easy for their customers would become the beginning of a long-standing partnership to help clients produce better e-commerce content. 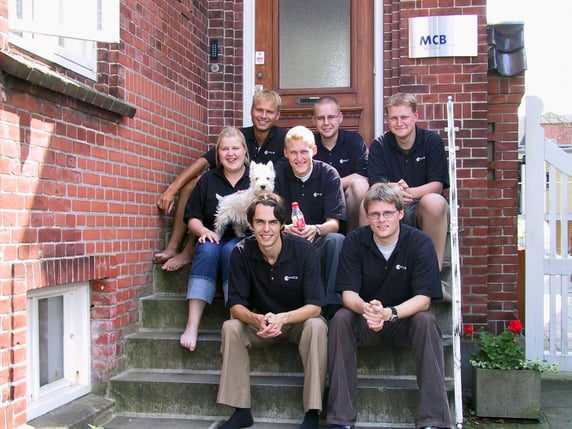 To address the problem he had spotted, Thomas left the consultancy he had founded to start a new company, Remove The Background, which was later renamed Pixelz, as it's still known today. It had been a side business with a small team but it started to grow, so Thomas sold his part of the consultancy and focused on Pixelz full-time.

Tejs, meanwhile, helped part-time with Pixelz while still working at the consultancy. The burden of working two gigs began to wear on him.

"I remember it clearly," Tejs says, "I was in my summer house, running around painting this old wooden house. And I decided I don't want to do this. There's no reason for having two jobs, a full-time job, and then this other thing that's not sure to take off so I wrote the email: 'Hey Thomas. I think maybe it's time you find someone else to do the website thing.'"

But Tejs has a rule never to send a consequential email when he's agitated. His mother had taught him to always sleep on messages like that-a lesson that had already served him well in life. "So I said, 'I'm going to leave it until tomorrow. Maybe I'll change my mind.'"

Before the paint could dry or Tejs could hit "send," the phone rang. It was Thomas.

The e-commerce behemoth wanted Pixelz to help its sellers get higher-quality product images on their site, ones that adhered to the platform's strict requirements.

But that wasn't all.

They also wanted a controlling stake in the company and although the company's heroes declined that offer, the interest and opportunity provided validation that assured Thomas that Pixelz had a stable future as far more than a side project.

"That was the point where I said to Tejs, 'Now you have to decide if you're going full time,'" Thomas recalls.

Within six months, Thomas and Tejs were working together full-time again, on Pixelz. 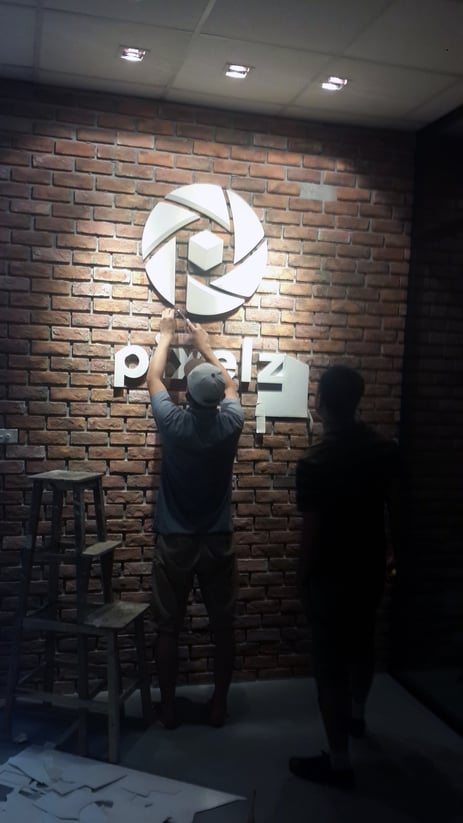 As Tejs, Thomas, and the company's third co-founder, Janus Klok Matthesen, found momentum-high-end retail, particularly in fashion, proved to be a market eager for Pixelz' work and the company boomed. Soon, they were buying computers left and right to equip close to 500 hires stretched across several offices. The team even had a night shift operation, needing round-the-clock production to meet demand.

"That was when we came to a point where we said, 'There's no way we can do this,'" Thomas says. "We need to put technology into this. We need a way to produce consistency at scale." The early attitude of "you can't put creativity into a formula," as Thomas puts it, gave way to a concession that operational process matters.

Identifying A New Need (and Opportunity)

Through Pixelz, Thomas and Tejs had an opportunity to visit photo studios, retailers, and other brands worldwide. What they saw was an industry toiling because they were bogged down by unnecessary complexity and too much work in progress. Pixelz was delivering images back to clients in just two or three hours, but studios were taking two weeks just to capture and send assets to Pixelz-often blowing their own deadlines.

"It was strange to see how they wasted resources," Thomas says. "So our mindset shifted toward being more operational after what we'd been through at Pixelz."

The duo wanted to help studios address the mounting backlog of products sitting in the studio, help reduce turnaround times and bring together information from disparate systems and communication channels. They wanted to meet the glaring need for a studio workflow management solution.

"You have so many exceptions in a photo studio that you have to come up with many different solutions," Thomas says. "It becomes so complex that you need a good system that manages complexity."

So they asked questions, learned about pain points, and came to understand the root causes so they could simplify production by reducing the complexity, not just managing it.

"We saw it in a different way. We saw a need for a system that could actually keep track of everything that was going on in a studio so you don't have to put all that effort into managing it."

And just like in their days of making sites for Danish bars, Tejs would make sure the user interface was a top priority. "You put an ugly UI in front of them, and they're not going to work as well as they could," Tejs reasons.

With a focus on workflow, automation, and design, Tejs and Thomas and a talented team began meeting the industry's need for a studio management solution. A client in Germany signed a contract for Creative Force, even before a line of code could be written for the program. It started a long-running dynamic for Creative Force, of listening to users and adjusting features based on client feedback.

Fast forward, and Creative Force is an international company with more than 40 employees across 7 countries, providing an end-to-end content creation solution for some of the biggest names in e-commerce. 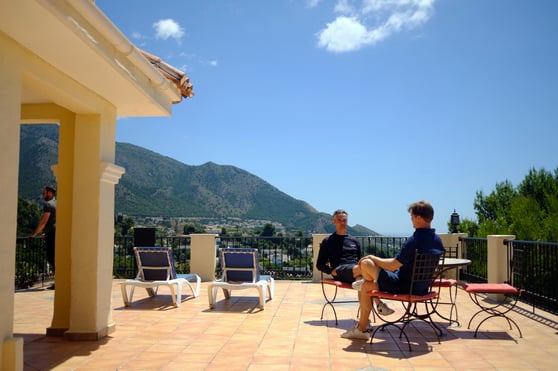 The success of Pixelz, and now Creative Force, comes from the dedicated work of a talented and devoted team. Beyond that, it's a story of serendipitous timing-a lot of little turns at just the right time.

Two competitors from Denmark's web design scene decided they were better suited as partners than rivals.

Pausing an email just long enough to get a message from Amazon.

Recognizing an industry's need because of the similarity to their own struggles.

And with the learnings that came with having overcome them, being perfectly suited to offer the solution.

There's a view of success-one of both humility and enchantment- in Creative Force's culture. Enjoy the path. Be open to possibility. And have a good nature about good fortune.

"When we're faced with defining turning points there's no way to know in the moment if we're making the best choice," Tejs says upon reflection. "But if you stay open to possibility, like seeing an opening and saying, 'Oh my God. There's an opportunity,'" then most of us end up in good places we couldn't have imagined.

To learn even more about the making of Creative Force, listen to Thomas and Tejs tell the full story in their own words in a special two-part episode of the Creative Operations Podcast.

Head of Community & Strategic Growth - Creative Force
Share this
Featured
Product News
A Year in Review: Top 11 Product Highlights of 2022
Plus a Look Into the Future Before we talk about a few of my favorite highlights from 2022, I'd like to wish everyone out there a happy holiday and a ...
Company News
The Story of Creative Force: Identifying a New Need
How Competitors-Turned-Friends Went From Lite Lagers to Luxury Looks. This is the story about how Creative Force came to life.
Change Management
Kanban View Offers an Incredible Visual of Your Production Tasks
A recurring theme in Creative Force is easy access to information. Whether it's assets, samples, or production status, information on the platform is ...
Metadata
Customizing and Automating Metadata Capture for eCommerce Photo Studios
You're probably familiar with the technical information that your camera automatically captures and records when you take a picture. Things like ...
Read on
Creative Force Reviews
A Year in Review: Looking at Our Top 10 Product Highlights of 2021
From all of us here at Creative Force to all of you talented people out there, we wish you a happy new year.
Learn more
Creative Force Reviews
A Year in Review: Top 10 Product Highlights of 2019
April 2019 was the month when we flicked on the switches and went live with our first customer. So much has happened in the 9 months that have passed since then, and in this post, ...
Learn more
Product News
Now Introducing: The Creative Force Mobile Application
We are extremely excited to introduce the Creative Force Mobile Application. With the launch of the newest member of our application family, we are untethering your team with on ...
Learn more